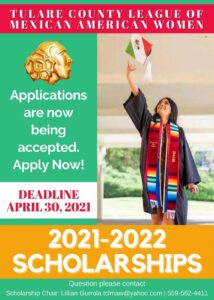 As the school year starts to come to an end, those pursuing higher education can definitely use some financial help. This year  the Tulare County League of Mexican American Women has secured six scholarships this year

Tulare County League of Mexican American Women’s (TCLMAW)  is a non-profit organization that has been providing support to Mexican American women pursuing an education after high school since 1979.

The mission of the League is to promote the advancement of Mexican American women through education leadership development, cultural enrichment, and civic engagement throughout Tulare County.

Their current board consists of Elena Nava-President, Katia Clark- Vice-president, Christina Osorio-Secretary, and Lillian Gurrola- treasurer, and Vanessa Mirabal-Community Service committee chair. The League has also demonstrated an interest in supporting the Ivanhoe community. Both Elena Nava and Vanessa Mirabal joined the January monthly Council meeting to introduce the organization to the Ivanhoe community.

We spoke to Vanessa Mirabal,  a member since 2019, who encourages anyone who wants to get involved to join their organization. As a current member, she was involved in the transition the organization made towards online events in order to continue serving Tulare County through the current pandemic.

Vanessa  Mirabal stated, “Our main focus is education and giving out scholarships to Tulare County. Not just high school seniors but returning college students like a mother that’s returning to college or, you know, a student that maybe took a year or two off or somebody starting their next semester so it’s anybody that’s attending college or like a trade school.”  This is encouraging information since not all higher education students know that they can qualify for scholarships, and higher education can be expensive which places academic degrees out of reach for many prospective students from low-income communities.

While the League organizes various activities, some of their current projects include:

Even amidst the new ways to connect with the community, the organization has kept an open mindset to finding new ways on strengthening their work within Tulare County.

If you are interested in joining or knowing more about their events, or of their six scholarships, contact Lillian Gurrola via: Email  TCLMAW@yahoo.com , Instagram: 2tclmaw, or on FaceBook at Tulare County League of Mexican American Women