Community Services Employment Training (CSET) is providing free tax preparation services to residents of Tulare County. The Volunteer Income Tax Assistance (VITA) program prepares federal and state tax returns at no cost to households with less than $54,000 in annual income.  VITA services will be available to the public through April 15, 2021.

Eligible residents may qualify for Federal and California Earned Income Tax Credits (CalEITC), a tax credit that puts money into the pockets of working families and individuals. Taxpayers who file their tax returns with an ITIN (Individual Taxpayer Identification Number), including undocumented immigrants, are eligible for the CalEITC and the Young Child Tax Credit (YCTC) when filing their 2020 taxes. Tax documents may now be dropped off at one of our VITA locations and a certified tax preparer will prepare their tax return.

Through the VITA drop-off service, an appointment is not required. Tax preparers will connect with customers within 72 hours except for weekends and holidays. Customers will be informed about the filing process and contacted over the phone to review, schedule a pickup, and authorization to e-file. Customers may download the checklist and intake form from our webpage www.cset.org/vita or stop by one of our offices to pick up a packet.

The VITA program is made possible by a strong partnership with the IRS, County of Tulare, Mechanics Bank, Walmart, Beneficial State Foundation, and CSET.  For more information on site locations and required documents please visit www.cset.org/vita, call (559) 741-4640, or email vitatraininghelp@cset.org 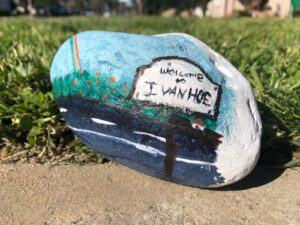 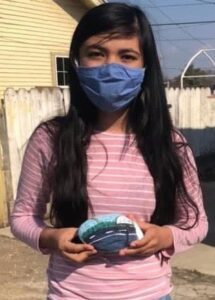 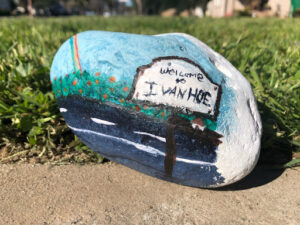 It is now safer to cross a busy intersection and books are available for all community members to access and keep. The library was built by community member Jose Haro who proudly shared it was his opportunity to “give something back” to the community. The first set of books provided by individual donations and by the nonprofit organizations, First Five and Read for Life.

The Mini-Library is open to receive book donations by contacting Esmeralda Garcia at esmeg559@gmail or dropping off books at 15958 Ave 327. A plastic bin with a lid is on the porch and donations are appreciated. The library is restocked at least once a week or as needed.

There are also rocks available at the base of the mini library for Ivanhoe residents to take home and paint. Once painted, please contact the Ivanhoe Community Council or drop off the completed rocks at 15958 Ave 327 for sealing. The painted rocks will then be placed back at mini library locations.

The first Ivanhoe resident to paint a rock was Genesis, a 7th grader at Ivanhoe Elementary. She recently painted a rock for Ivanhoe’s Mini Library and shared that she was inspired by a Facebook profile picture which was taken by Jose Verduzco and used for the group page: “You know you’re from Ivanhoe…”.

The Ivanhoe Sol’s “Community Art Feature” is a component in our newsletter that will highlight art that should be shared with our community. It is not limited to drawn art. If you have a written piece, lyrics, or something you believe should be shared please submit it to theivanhoesol@gmail.com and we will do our best to share it with our community.

Supporting youth within Ivanhoe has been an increasing concern with local community advocates, but there has been minimal opportunities for youth to meaningfully engage outside of the school setting. With the start of a new year, the Ivanhoe Youth Advisory Committee has been created by the Ivanhoe Community Council to allow Ivanhoe‘s youth to have a safe place in which they can voice their opinions, develop interpersonal skills, build relationships, and learn how to take action to address their concerns in the community they live in.

These meetings are held virtually through Zoom and are hosted by Ivanhoe Community Council’s Chairperson, Mayra Becerra. Meetings started in January and are held twice a month, on Tuesday evenings at 6PM.  Becerra says, “We are reaching out to our youth because everything we do is for them. Their ideas and visions are valuable to us. The future of Ivanhoe belongs to them.”

Youth Vision for a Better Ivanhoe

According participants, the first meetings for the Youth Advisory Council were designed to identify priorities for future improvements in the community. Their answers varied but included a strong agreement for more sidewalks, development of a skate park, more youth sport options, in-person community events, a movie drive-in, and a community center. Members have also had the opportunity to express ideas on what they would like their meetings to include in order to make their meetings more fun, engaging, and inclusive. With their input, future meetings will include more personal check-in discussions, arts and crafts, and interactive games.

At the most recent meeting held on Tuesday, February 16th, the main focus was developing teamwork skills while designing an ideal skate park for Ivanhoe. Youth had input on the name and design of the park and location on everything they wanted in the park. A walk way/ trail circling around the entire park for safe walking for community members and pets, skate ramps in the center of the park and basketball courts are just a few of the activities envisioned as part of the park. A simple blueprint was designed and will be finalized with color by Jose Alberto a Senior at Golden West High School.

This program also allows for additional leadership responsibilities. For example Stephen, a 7th grade student at Valley Oak volunteered to attend Ivanhoe Community Council’s February meeting as a representative for Ivanhoe’s Youth Advisory Committee. He will take notes and share information with his peers at their next youth meeting.

There are currently several youth, oriented opportunities for community members to participate in. For example, Ivanheo youth can submit artwork and nominations for this year’s Tulare County Women of the Year Awards to celebrate Women’s History Month. Other opportunities include creating rock art for the Mini Library and accessing scholarship opportunities through Golden West High School’s main web page.

Starting March 1st, the Tulare County Area Transit (TCat) will also offer free rides to youth riders between the ages 7-18 with a K-12 student ID or any government issued ID with date of birth.

Ivanhoe youth are an essential part to our community and are truly valued for their efforts in commitment, involvement and leadership to help improve Ivanhoe. Ivanhoe’s youth are our future, let’s invest in them today.

If you are interested in participating in the Ivanhoe Youth Advisory Council, please call or text contact Mayra Becerra at (559) 468-6253.