Make A Difference Day at the Community Rose Garden

On Saturday November 2nd several Ivanhoe residents unified at the Community Rose Garden at the intersection of Avenue 321 and Road 160. Roughly a dozen people joined in clean up activity. The event was organized by the Ivanhoe Community Council for the annual “Make A Difference Day.”

According to members of the Ivanhoe Community Council, before the pandemic the event was much larger with a community trash pick-up and large item trash collection. However, due to the COVID pandemic the large trash collection was postponed and efforts were focused on the town rose garden where people could safely practice protocols to protect residents from exposure to COVID.

Participants also said that the Rose Garden was a priority because aside from the recently developed Bob Felt’s Sr. Soccer Field and the Ivanhoe Elementary School, the Rose Garden is one of the only other community spaces in Ivanhoe. Many residents report using the Rose Garden as a destination to walk to within the community or on the way to the Supermarkets. Over the years a bench has been installed and even a memorial to someone who had passed away near the area. 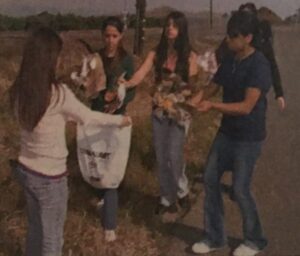 Previously, the Ivanhoe Rose Garden was a site where trash was dumped regularly. The space was initially cleaned and roses were planted by the Ivanhoe Junior Leadership program. This group of high school aged students was organized and supported by the nonprofit organization CSET, Community Service and Employment Training. 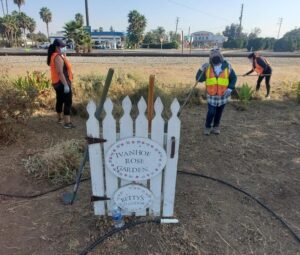 The Rose Garden is also known as Betty’s Garden, named after Betty Vickers who was one of the original people responsible for the creation of the Rose Garden. Vickers served as the director for the Ivanhoe Youth Center It has been in the community for years.

After hours of pulling weeds, residents were treated to donuts and carne asada burritos.

Regular maintenance of the area’s like the Ivanhoe Rose Garden is important since there are many invasive plants in the area that can negatively affect yards or green spaces like the Rose Garden. Aside from beatification of this highly traveled area, this community clean up event provides some important environmental benefits to the local landscape.

While preventing weed growth that draws water resources from the roses and trees, there can potentially be non-native toxic plants like the “Solanum Elaeagnifolium” otherwise known as “Nightshade” or “Tomatillo de Buena Mujer”. Since many birds and small pets pass through the area, there is a risk for poisoning since every part of the plant is poisonous.

This plant grows along fields, pastures and roadsides and is characterized by five pointed purple flower petals with yellow anthers located in the middle of the flower. Its leaves and stems are covered in small white hair-like fibers and the plant can grow up to three feet tall.

Kate Ludwig, a Field Ecologist specializing in botany with the National Ecological Observatory Network says the “Nightshade” or “Tomatillo de Buena Mujer” belongs to the tomato family and has fruit that looks similar to many things we eat. However she notes, “it is incredibly poisonous. This belongs to a group of plants that has horribly deadly toxins which could be problematic if ingested by wildlife or people. This is not something to keep around the garden especially if you have little mouths from children or pets around.”

This plant is a non-native, meaning it was initially brought to Ivanhoe by some major environmental disturbance from activities like construction or from cattle ranching. Ludwig says that “Native plant species can be forced out of their natural range which can have cascading effects on the rest of the community. If you change the plant community, it changes the insect community, which changes the vertebrate community which includes mammals and birds.”

In order to prevent the spread of non-native and invasive plants, Ludwig offered additional advice to Ivanhoe residents: “The best thing for the landscape is something that is native. Be aware of what you are transporting and where you are traveling, especially if you live close to a waterway or any natural environment. When transporting things you can even take seeds in clothes, shoes, or a blanket by accident.”